I love drinking Malta, a carbonated malt beverage with many health benefits. Like the beverage, I would surmise that the country of Malta is also good for your health, offering a great place, including beautiful beaches, for relaxation.

After my time in Lecce, I had four days before the start of my semester in Bologna. Since I would only be able to travel on the weekend during the semester, I figured this would be a great chance to explore a new country.

I started out by going to Skyscanner to find prices. My favourite feature of this fare comparison website is the ability to compare fares among both destinations and airlines simultaneously. This is how I chose Malta because it had one of the cheapest flights from Puglia and since it was one of the lesser known European countries, I was intrigued. After booking my flights (from Bari to Luqa and Luqa to Rome), I used Airbnb* to book a private room in Tarxien. Tarxien is a nice/quiet location, more famous for the Tarxien Temples. If you are more of a partier and can afford it, then I suggested stayed closer to Paceville/St. Julian’s. I might also suggest staying in or close to Valletta because getting to most places requires first taking the bus to the capital. The bus ride to Valletta is not an extra cost since each ticket is valid for 2 hours, but it is extra time spent on buses instead of exploring.

Roaming charges were recently banned among in the European Union (as of June 15, 2017). I wish it had decided this a year earlier so that I could have benefitted but since it hadn’t, I had to make a choice of whether to pay extra for roaming while travelling. Based on discussions with friends who studied abroad before me and my desire to avoid unnecessary costs, I decided not to pay for roaming and go without data. Besides, it’s not that hard to find wifi (restaurants, banks, stores such as H&M) while travelling.

On the day of my flight to Luqa, I took a train from Lecce to Bari to get my flight. I actually missed my train and had to buy a new ticket. What can I say?! I’m Jamaican. I also got lost trying to find the train station and got there as the train was leaving. Fortunately, I had budgeted sufficient time for mishaps so I arrived early for my flight and the lost ticket was relatively cheap as I got a discount through TrenItalia’s CartaFreccia programme for persons under 26 years of age.

I had a pleasant flight with Ryanair and my first experience with the budget airline world went well. I have to say though, just being able to walk out the airport and not go through customs or immigrations really threw me off. I love the Schengen Zone haha!

To start the trip off, I had to get a bus pass for the public transportation. Since I would use it often enough, tourist-ing and all, I got a pass for 7 days of unlimited travel even though I was only there for 3 full days. I decided the night before that each day would be spent exploring one or two areas as well as the beach. I also intended to go clubbing one of the nights but eventually did not because of costs (night taxis) and I don’t like going out at night alone while travelling.

My first full day in Malta was dedicated to Mdina. A former capital of Malta, it is a fortified city commonly called “the Silent City” and located atop a hill. Very few cars are allowed in the city and businesses apparently have strict noise regulations. You can also see signs encouraging silence as you walk around. I spent about 2-3 hours just walking through the city streets. Eventually, I got to Bastion Square which allowed an amazing view of neighbouring cities. After enough walking, I stopped for lunch at Fontanella Tea Garden for their wifi and left with a great ham & cheese sandwich to go. I also got some souvenirs made from Mdina Glass and walked around some more before heading back to Valletta.

I didn’t plan to explore Valletta on the first day but since I had spent less time in Mdina than I expected, I decided to walk around Valletta before heading to the beach. Valletta was quite overwhelming, compared to Mdina and particularly because I had not yet researched it yet. However, I decided to go with the flow, walk and see what I found. I ended up walking through some side streets where I was greeted by colourful doors and windows. Eventually, I got to the Lower Barrakka Gardens, a small park which overlooks the Grand Harbour and allowed me a great view of the Siege Bell War Memorial and the three cities (Vittoriosa, Cospicua and Senglea). Another highlight of my walk through Valletta was finding Grace Aloe Vera drink and Catch candy bar in a store. 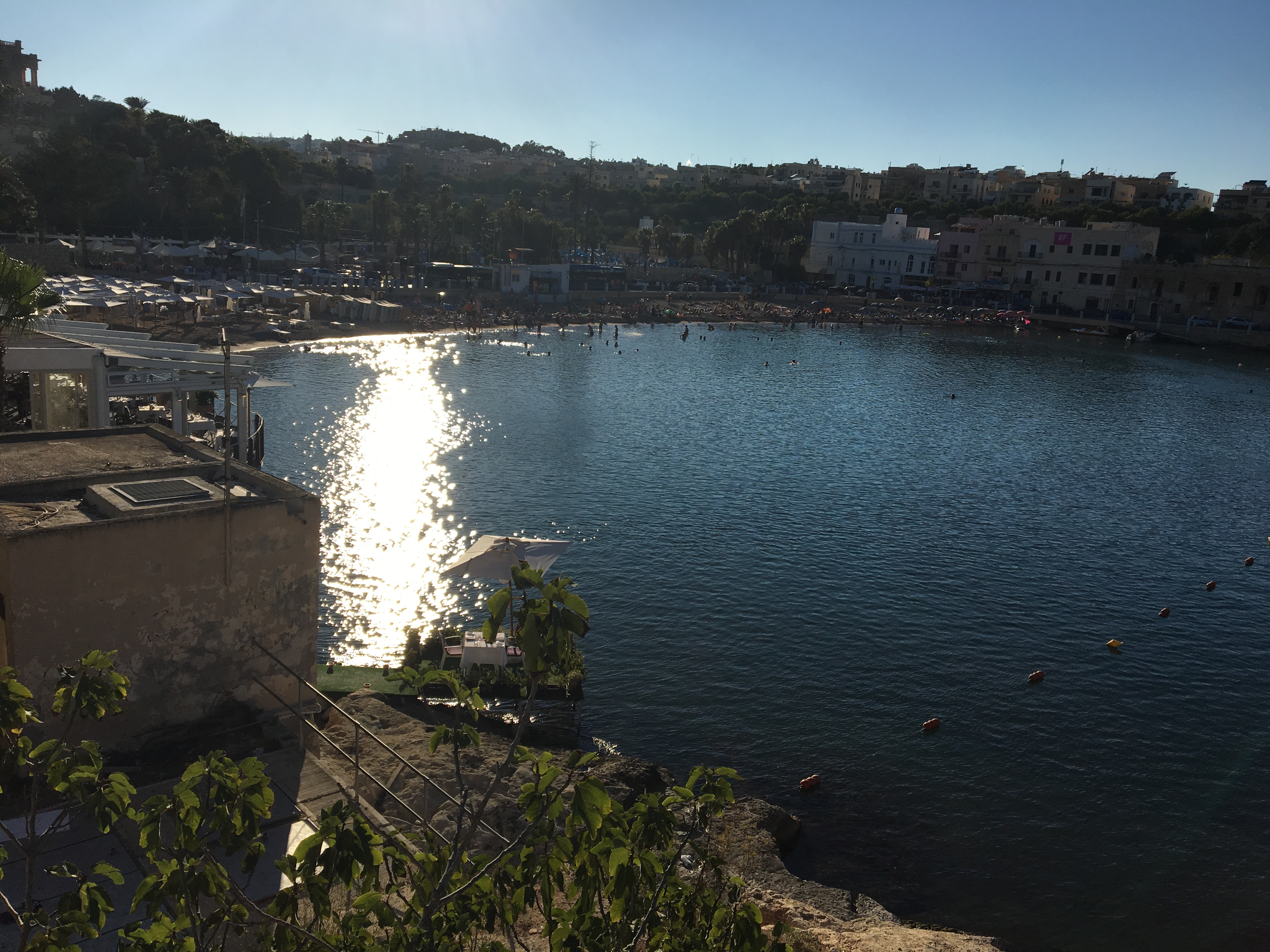 Up next was the beach! After getting advice from my hosts, I decided to head towards St. George’s Bay but to be honest, I’m not actually sure if I ended up there. While on the bus, I noticed that I was passing several beaches and just decided to get off at the next beach I saw. Unfortunately, the sand felt more like gravel and was uncomfortable to walk on so I did not spend much time there but made the most of it and enjoyed the several dips in the water.

While leaving the beach, I passed a booth selling boat tours and I stopped to give a listen. I left wondering if I had magical haggling skills as the salesman just kept offering me “discounts” even though I barely did anything. As a result, I bought a reasonably priced Luzzu Cruises boat tour of the two other islands of Malta, Gozo and Comino which also came with a tour of the 10 creeks around Valletta. Just like that, the rest of my trip was planned for me.

My second day was spent learning about the history of Malta, including its involvement in the world wars and viewing the Maltese islands from the aboard a boat. After sailing past Comino, we docked at Gozo for a 3-hour tour of the island, with a very entertaining and witty tour guide/driver. He was also kind enough to take us to a viewpoint which provided a great view overlooking the harbour and parts of the island. We then returned to said port and returned to the boat. Our next stop was the crystal clear waters of the Blue Lagoon on Comino. This was a great chance to just sit back and relax as well as cannonballing into the water from the boat. On my third day, I started off by taking the tour of the creeks mentioned above. I was once again able to learn about the country’s history and see parts of Valletta from the sea which definitely gives a different perspective. This boat ride took up the entire morning. I then spent the rest of the day at a nice sandy beach in Ghadira Bay, enjoying the refreshing Meditteranean Sea.

My favourite things about Malta were the beaches, boat rides and the public transportation. Anyone who knows me knows that I LOVE the beach and the boat rides really added to my experience. I was able to learn so much about the country and its history at a very reasonable price while seeing the islands from another angle. 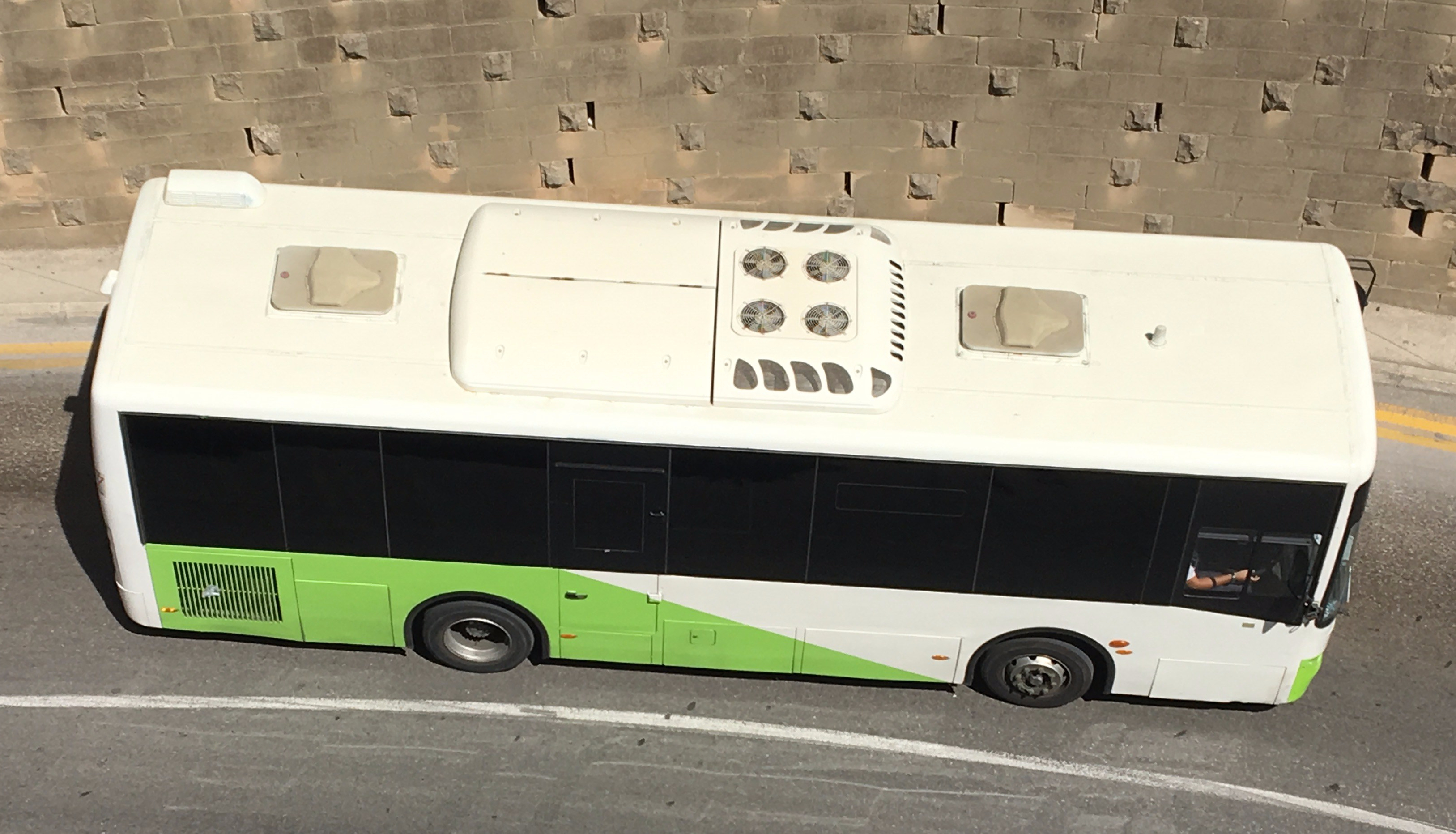 Maltese public transportation is one of the best I have experienced. It is quite efficient and easy to figure out. Almost all bus stops have signs which say which buses stop there and where they go. One of the days while trying to get back to my Airbnb, I accidentally took the wrong bus (my fault for not paying attention) and I realised my mistake after the bus made an unfamiliar turn. Realising my lost, I initially got a little flustered but after just crossing the street to go the opposite directions, I was able to decide which bus to take by just looking at the signs.

Honestly, I spent more on this trip than I needed to, especially on my flights. I booked the tickets 12 days before the flight, which is cutting it really close and meant that I paid significantly more than I would have if I booked the tickets when I first learnt that I would have these 4 days free. However, three days in Malta will never be enough and as my first (solo) trip, Malta surpassed all my expectations!

Until next time,
Juleen

*If you don’t have an Airbnb account and plan to get one, use this code to get US$20 off your first booking. Full disclosure, I also get US$20 for referring you so thanks! 🙂

5 thoughts on “Doing It Solo in Malta”

Juleen started traveling when she first left Jamaica to attend college in the United States. Since then, she has visited several cities, states and countries. Focusing on exploring the world around her, both near and far, Juleen hopes her blog and YouTube channel will inspire others to go out and experience the world around us.

Begin typing your search term above and press enter to search. Press ESC to cancel.